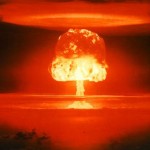 I love getting myself worked up listening to conservative talk radio. It’s a form of entertainment I indulge in at times when in a car and without anything else interesting to listen to. In times like these I turn to Sean Hannity and Bill Cunningham to keep me company. In a way they’re very Orwellian in their style, sometimes reminiscent of the Two Minutes Hate from 1984, but stretched out for hours on end to fill the great demand.

Endless people call in patting themselves and the host on the back for being “Great Americans” and whatnot. They talk about how the president is going to take their guns away from them and why it’s a great idea to stockpile weapons. They talk about how the war in Iraq is going great and how we’re winning. And they talk about the economy and how there’s a left wing conspiracy to make us all communist. It’s all pretty entertaining and all that fear mongering is quite normal for this particular station.  They have a great line-up of talk show hosts that specialize in it after all. What caught my attention yesterday as I was listening was not that though, but one of their commercials.

Between the usual buy-a-bag-of-diamonds-for-your-girlfriend or let-us-refinance-your-house-while-we-feast-on-the-rotten-remains-of-your-retirement-plan type stuff, there was one ad that was especially cynical and “doomy” in nature. It suggested that investing in gold was a a thing of the past and, instead of gold, you should be buying non-hybrid seeds to grow your own food. Because, once the world implodes, the clock winds itself back to the dark ages and everyone turns back into apes, self-grown food will be the only way to survive, shy of eating your young.

Maybe I’m paraphrasing a little, but the general concept is the same. Seeds are the currency of the future. Why I didn’t see this before, I’m not sure. It’s so obvious now. Thank you conservative nut-jobs for making me aware of this.

I mean, can you imagine, once nuclear winter hits, how ridiculous it would look trying to eat piles of gold?  I would be kicking myself forever for not investing in seeds (at least till I starve to death anyway). Now however, thanks to some heads-up from these nice radio folks, I will be buying seeds,  growing my own food and eating lots of that non-hybrid goodness.

4 replies on “Preparing for the Apocalypse”

I just love that they insisted on non-hybrid seeds. 🙂 Yeah no sissy seeds for them! Plant real plants, American plants . . . wholesome like our forefathers planted!

Yeah, we need red white and blue plants. It’s all comical anyway. Most idiots who buy seeds, don’t know how to farm anyway (myself included) and will starve to death. It’s like telling someone to skydive without training, push them out and tell them pull a cord somewhere. They’ll figure it out, or not, and just plunge to their death. Good luck with that!

Be careful, Pete..you may be just listening for fun right now, but that’s how they get you. Don’t get sucked over to the darkside…first it’s seeds..then guns…never know where you will go next..buying an American made car maybe.