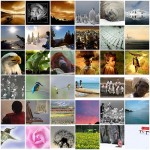 As most people who know me know, I take a lot of pictures. And when you take a lot of pictures, you also end up having a lot of pictures. Funny how that works. So, today I wanted to share with you at least one (good) way of organizing your photos by naming them properly. I know there are many many more ways of organizing your photos, but I thought I’d at least share what’s worked for me in the past. It’s not an exact science. It’s not perfect, but I’ve been honing it ever since I started with digital photography. It can be a little time consuming, but having tens of thousands of photos, it’s absolutely necessary to organize them somehow.

One question that might pop up in your head could be: Why aren’t you using one of the existing software out there that are specifically designed for this purpose, like let’s say, ACDSee, Picasa, or Adobe Photoshop Album? The short answer to that is: I am. The longer answer follows below.

Here’s the rub, and this might be a little technical so stay with me. I don’t want to get locked into one specific platform. For example, if I import all my pictures into Picasa and tag them to make it easier for me to find them, I am from that point relying on Google not to one day scrap Picasa. I would have basically done all that work (which is a lot, considering I have about 150GB of photos) for nothing, because tags in picasa aren’t exportable. The information you’re saving about the picture, isn’t being saved to the picture itself, but to some propriatary index that Picasa uses. Once you import your pictures into another piece of software, you’ll have to redo your work (unless there’s some export/import feature I’m not aware of).

What would be ideal is if there was somewhere in the EXIF data where you could put these tags or descriptions. This would solve the problem, since most photo software reads the EXIF tags, right? Well, unfortunately it’s not that easy. There isn’t a good place in the EXIF data for that purpose. I have tried, but even in fields where it looked like you could put arbitrary data wasn’t ever read by the software I have been using. So, that turned out to be pretty useless. I want a solution that will work nomatter what software I happen to be using.

So, the only reliable way of doing this, at least as far as I know, is to name your pictures/files in such a way so that you have a basic idea of what’s in them without actually having to open them to take a look. With file names in Windows being alowed to be up to 255 characters, the descriptions/filenames can be quite long. That’s the time consuming part. But, I guess you’d have to do something similar with tagging anyway, so it’s no big deal. And it’s not like I rename every single file separately. I rename groups of files based on event. In rough terms. It can sometimes be a group of 3 pictures, or 300. It depends. But the key thing here is to make it as granular as possible, because this will make it easier to locate the picture in the future. So, it’s usually a group around 20-50 that get a similar name.

To rename the files you can use any of the mass file renamers out there. I use Total Commander‘s mass rename function. It’s shareware so you can download it and use it without paying. Since I’ve used it for over 10 years, I finally broke down and bought a license last year.

As I mentioned before, I have, over the years figured out a renaming format that works pretty well for me and below is an example of what a filename could look like.

I always start with a date first, with the format of YYYYMMDD. That way, the images will stay sorted if you sort them by name. I then add an underscore. Not really necessary I guess, you can use a space, but I’ve never really felt comfortable with file names that have spaces.

The next 6 numbers is the time HHMMSS followed by a counter if for some reason there were more than one image taken that second (which actually happens if you do a series of shots. Sometimes up to 3 or 4 depending on how fast your camera is).

What I also should mention is that, a multi-rename tool will grab the date/time information from the EXIF data of the image, so it’s not necessary to enter or remember when each picture was taken. If, of course, the system date on the camera was set correctly when the file was initially saved.

Finally we have the description. I try to be as descriptive as possible. I tend to avoid words such as the, and, and with, just because they normally don’t add much to the description. Most of the time when you look for a specific photo you have a key word in mind, which is why put as many of those as possible in the name. The key words can be anything you feel describes the picture/series of pictures. I try to add location as well. The more you add, the easier you’ll have finding your files later on when you do a search.

Now when we’re done renaming, we can import them into our favorite program. I use Picasa a lot since it’s very simple and free. Once the photos are imported they get indexed by Picasa, and I can now find any image I want in a matter of seconds.  If I want last years pictures of my kids playing soccer I search for: 2008 soccer kids. Done. If I want pictures of trips I’ve taken in June 2007 I type in: 200706 trip. Bam!

I know this was somewhat of a lengthy post, but believe me, if you take lots of pictures and have thousands upon thousands of them, this will help you find what you’re looking for instantly.

9 replies on “Organizing your digital photos”

Adobe LightRoom has a quite intelligent multi rename tool as well. Just FYI 🙂

@Kristoffer:
I know Lightroom is great. Does it actually rename the files, not just tag them? Either way, if that’s the case then great. Any multi-renamer works, I just happen to use Total Commander. The benefit of renaming the files is that you know what they contain without even having an image viewer.

wow – you never cease to amaze me with the levels at which you geek out, Petey. I love it. Because this would drive me bat-shit-crazy to do, can I pay you to do it sometime?

Ha! Well, it’s not a very *fun* task for sure. I would probably not even do it for money, it’s that boring, but the upside is that you get instant access to your photos, instead of hours of browsing for the right one. So, the process is boring but the reward is great. If you do ever so often it’s not that bad, but if you have to redo your whole library of images, I’d probably rather shoot myself. And besides, I don’t know who or what or where your photos are taken.

And don’t tell me you personally took all those pics in the mosaic? 😉